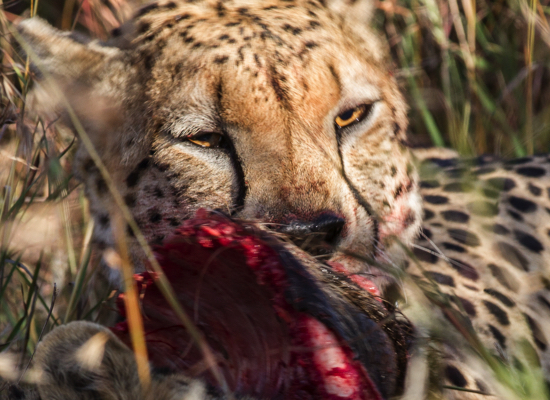 In September 2016, one of Mugie’s resident cheetahs was found with a broken hind leg. He limped severely and, as he couldn’t hunt, his health deteriorated rapidly and we all feared the injury would be fatal.

Although cheetahs are solitary creatures, males, often brothers, form coalitions and defend their territory together. Amaka and his brother Zuri, had done just this, and at six years old, had spent their lives as companions and compatriots.

So, when Amaka was injured, because of their close bond, and reliance on each other as hunting partners, Zuri was very unsettled by his brother’s injury. He was often found traveling ahead of Amaka, yapping at him to follow.

The fact that Zuri and Amaka not only continue to survive, but thrive, is amazing. Zuri carries out a hunt on his own, and then calls Amaka to the kill. The utter synchronicity with which they live is rare, and unbelievable.

There are only 7,000 cheetahs remaining in the wild, confined to just 9% of their historic range. This extreme decline is due to a lack of prey (from poaching and habitat destruction), vulnerability to humans (cheetahs are often in conflict with farmers because they are a threat to livestock), high mortality of cheetah cubs (as they frequently fall prey to lions, jackals, hyenas, and birds of prey), and the primary reason – habitat loss due to human encroachment and urbanization (and drastic increases in population of human and domestic animals).

At Mugie, where we tirelessly try to protect, and educate about the importance of cheetah, we have still lost several animals to retaliation by angry herders. A precious population of only a few cheetah remains at Mugie.

Fortunately, Zuri is collared and has given us tremendous insight into his, and Amaka’s, movements and behavior. Satellite imagery of his travel around Mugie, have shown that there are four distinct places that he and his brother cross the existing road. In addition to these places, camera traps and observations have identified four more road crossings used by other wildlife. As the road through Mugie becomes paved, it is imperative that we build wildlife corridors – the survival of the wild animals relies on it, and with dwindling populations of many species, it is vital to their conservation.

Zuri’s collar no longer works; the battery has exhausted its lifespan and the Cheetah and Wild Dog Project that originally funded the collar and the collaring, doesn’t have the funds to replace it. Also, two new, elusive, young cheetahs have been spotted around Mugie, a male and a female, and we would like to raise funds to collar these animals, so as to protect them from farmers, and to track their movements. We are raising funds to support the collaring of two additional animals, as well as replacing Zuri’s collar, and to build wildlife corridors in the most appropriate locations.

Next
Tala the Giraffe